This lecture surveys some very simple models with one parameter for some real research data. In your research it is rare to study only one variable with one parameter, but the concepts you learn in this lecture will naturally generalize to more regular statistical models, like regression and multilevel models. Specifically we will consider two models:

You’ve already seen the binomial model in the AIDS example. When you have one event with two outcomes, like flipping a coin or sampling a respondent and asking whether he or she has a college degree, the variable is called a Bernoulli variable. Mathematically we will denote one outcome as success and coded as 1, and the other as failure and coded as 0 (poor terminology may be, but that’s by convention). For example, if the variable is coin flipping, we have 1 = tail, 0 = head. If the variable is whether the respondent has a college degree, it can be 1 = college or above, 0 = no college. Therefore, in the AIDS example, each observation is considered a “Bernoulli” outcome (Alive vs. Dead). An additional thing to note for the Bernoulli/binomial model is that, instead of setting the prior on \(\theta\), sometimes we’re more interested in setting the prior for a transformed parameter that has values between \(-\infty\) and \(\infty\), such as one on the logit scale (as related to logistic regression).

Instead of the subsample, here we will use the full sample in the Aids2 data set, with the same informative prior of Beta(46, 34). In the full data, we have

Here is the relationship between \(\varphi\) and \(\theta\): 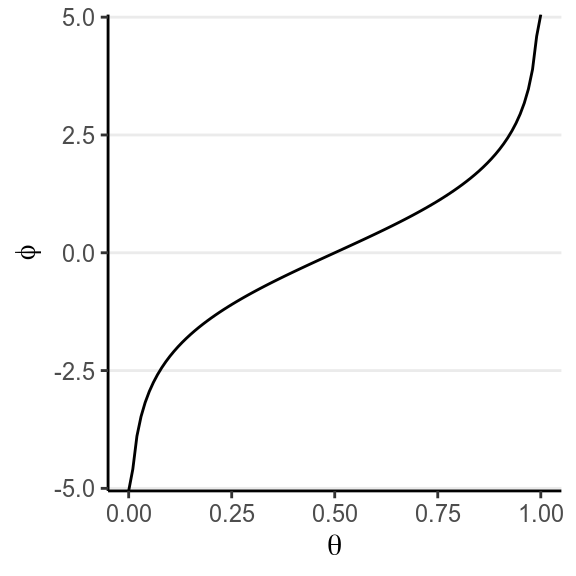 This reparameterization is popular because it is commonly used in logistic regression, and is actually a naturally parameter for a binomial distribution for some theoretical reason. Instead of having a support of [0, 1], it has a support of (\(-\infty\), \(\infty\)), or the whole real number line.

and transform each value to \(\varphi\):

The resulting prior on \(\varphi\) will be 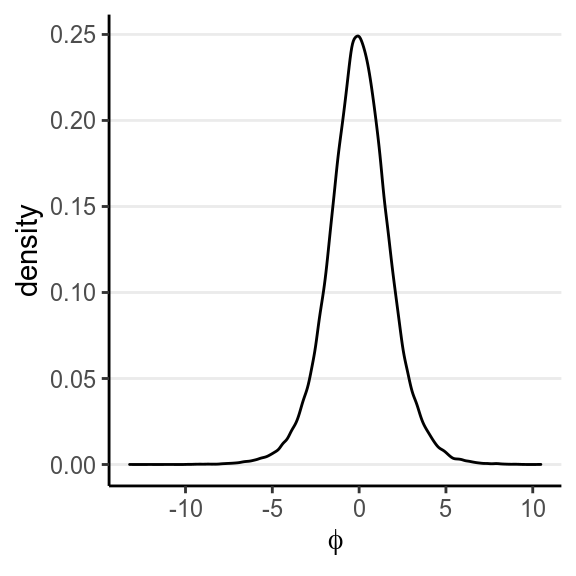 which assigns more density to \(\varphi = 0\). Although generally you will get very similar results using either a non-informative prior on \(\theta\) or on the logit \(\varphi\), this non-invariance is one major critique on Bayesian from frequentist, especially the use of non-informative prior. 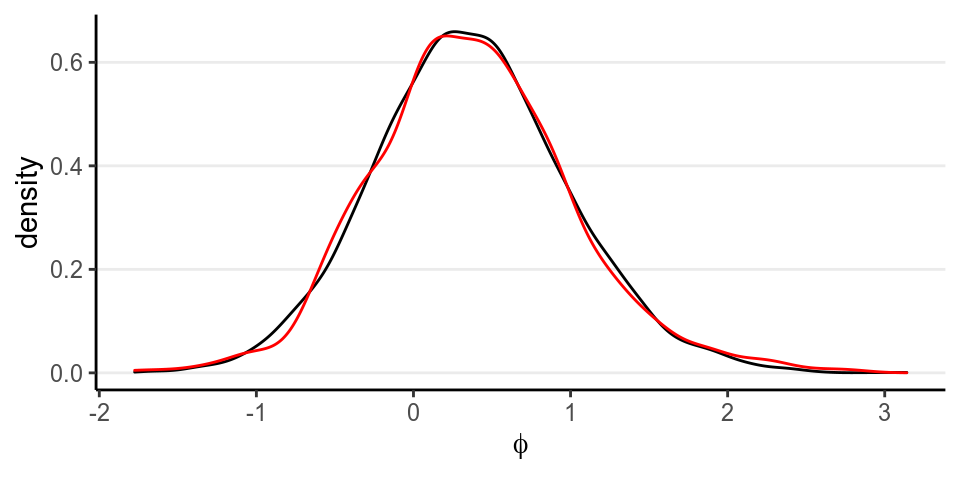 Now, we need to know whether the model fit the data well. If we only have the status variable we don’t have much to check for a binomial model. However, as there is information for other variables, we can use them to check the exchangeability assumption. For example, we can ask whether the data from different state categories are exchangeable. The death rate across the 4 state categories are

Now, we can generate some predictions from our posterior distribution and our model. 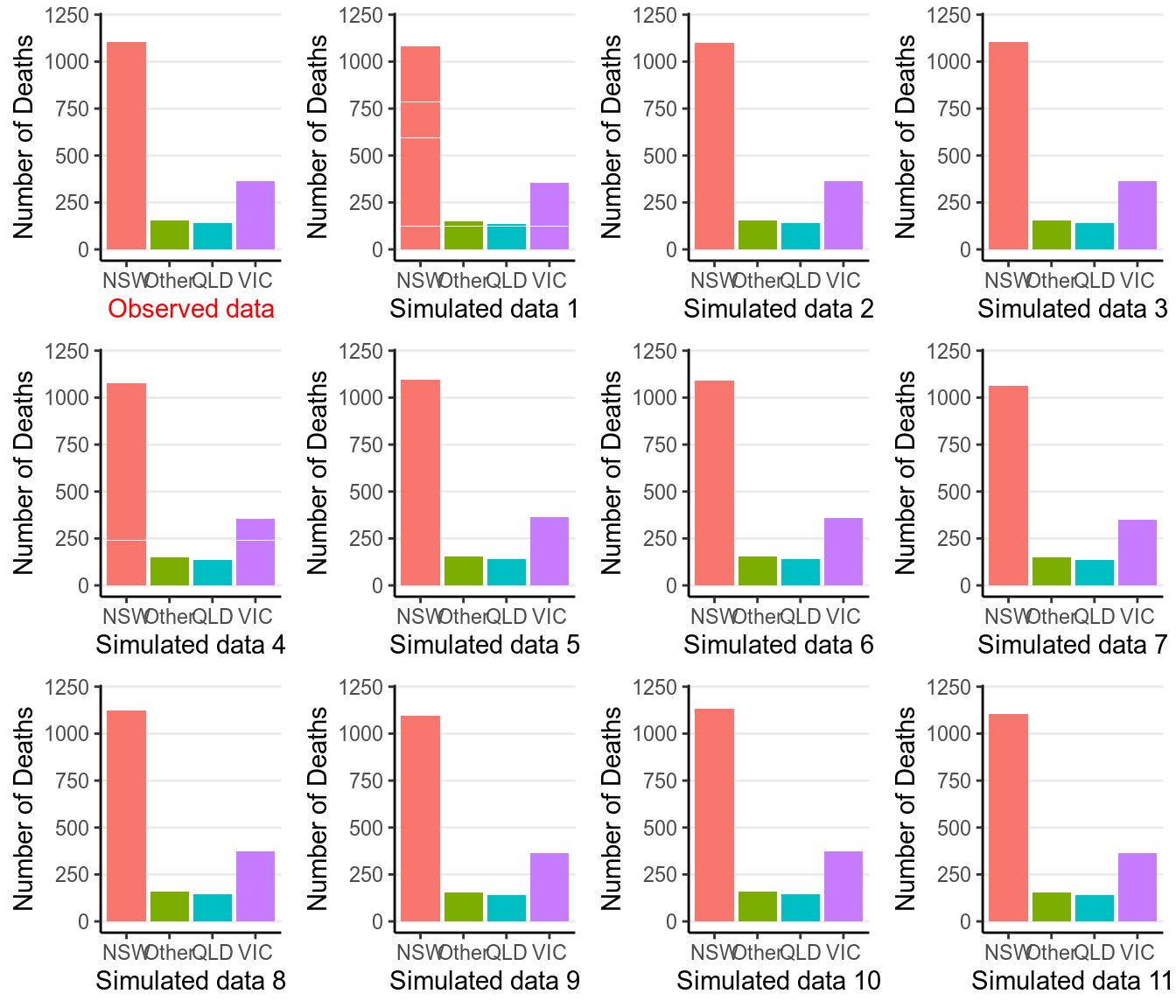 So the observed data (the first subgraph) look similar to the simulated data. We can also conduct a posterior predictive check by defining a test statistic, here we will be using the difference between the highest death rate and the lowest death rate across the 4 state categories: 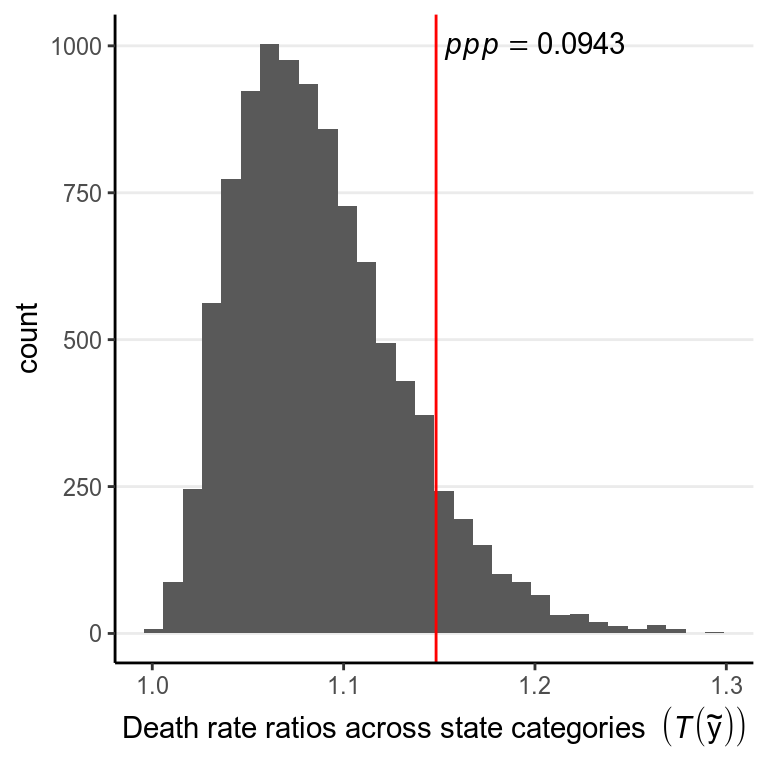 The posterior predictive p-value (ppp) using a test statistic of the ratio between the highest death rate and the lowest death rate among the 4 state categories is 0.094. ppp is defined as the probability of drawing a sample from the posterior predictive distribution with a test statistic that is as high as the observed sample. Mathematically, if we define the test statistic as \(T(y)\), it is represented as \(\mathit{ppp} = P(T(\tilde y) > T(y) | y)\)}, and it’s conditional on \(y\) because it is based on the posterior distribution.

We generally do not apply the same cutoff of \(p < .05\) as in frequentist statistics, which is a convention under strong criticism. Instead, what Bayesian strives for would be to get a posterior predictive \(p\)-value close to .50 for the key test statistic. Therefore, given the check, we should consider modeling the data as four different states, or better by using a hierarchical model. 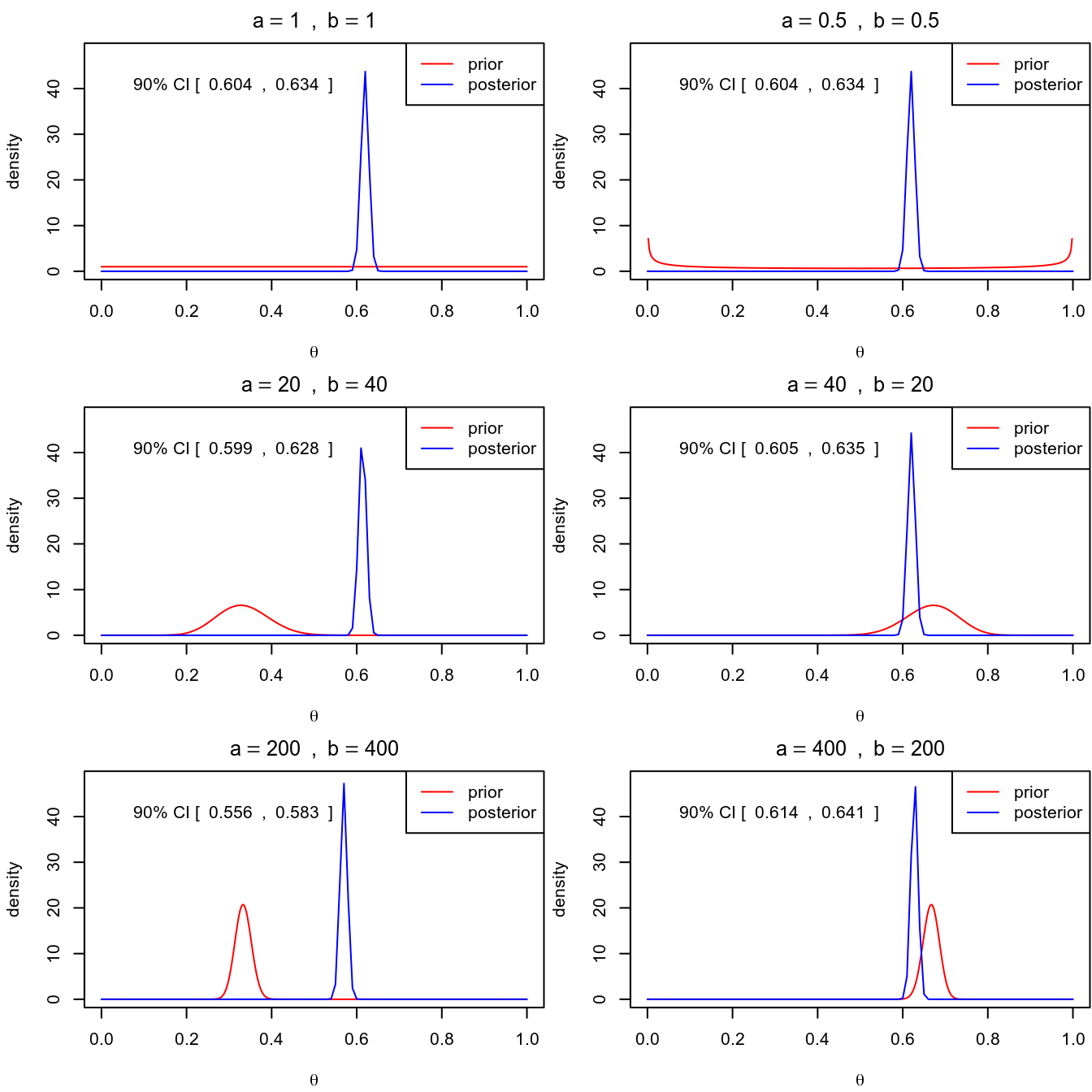 You can see one needs a very strong prior (equivalent to 600 data points) and with the prior and the data not agreeing to get a substantially different conclusion.

The \(\mathrm{Beta}(1 / 2, 1 / 2)\) distribution is called a Jeffreys prior (https://en.wikipedia.org/wiki/Jeffreys_prior), which is derived according to some statistical principles for different models. One big advantage of a Jeffreys prior is that it is invariant, meaningful that the prior will stay the same even under reparameterization. However, like conjugate priors, Jeffreys prior limit the choice of prior even when there are true prior information available.

A Poisson distribution is suitable for count data in a fixed interval, when the average rate of the event happening is constant, and when the time from one occurrence of the event to the next is independent. For example, think about the number of e-mails for a person each day. If we know on average a person has 20 emails a day, and we assume that emails from different sources arrive independently, then we can model the number of emails in different days as a Poisson distribution. 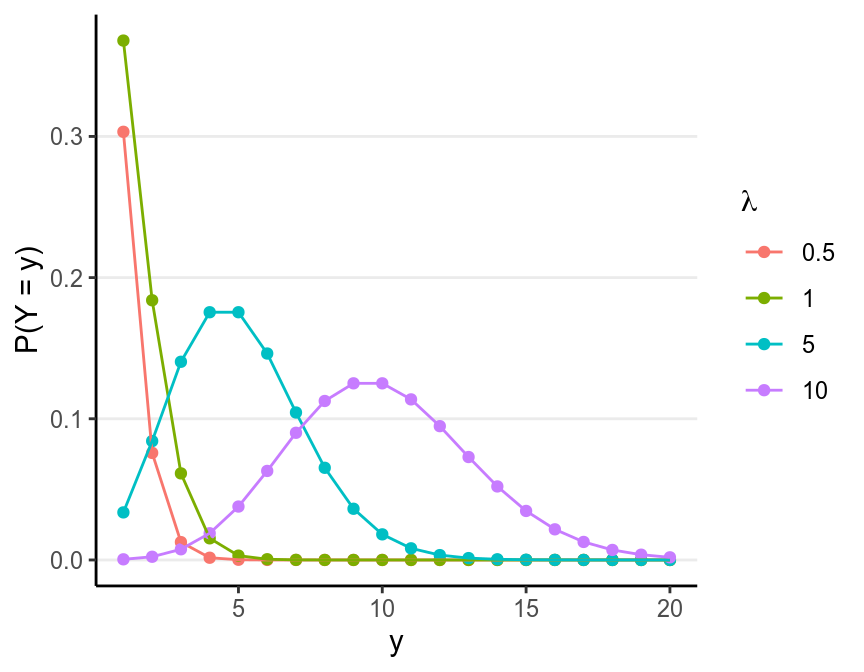 As you can see, the larger \(\lambda\) is, the closer the distribution is to a normal distribution.

We will use a data set by (Silberzahn et al. 2018), which the authors sent out to 29 research teams for analyses (read the paper for more information on the context). We will use a subset of the data, which contains information of 564 soccer players playing in England, and the total number of red cards (which happens when they committed a foul deemed serious by the referee of the match and will be sent off the match). Below is a summary and a plot of the data, and a theoretical Poisson distribution that matches the mean of the data (i.e., 0.9. 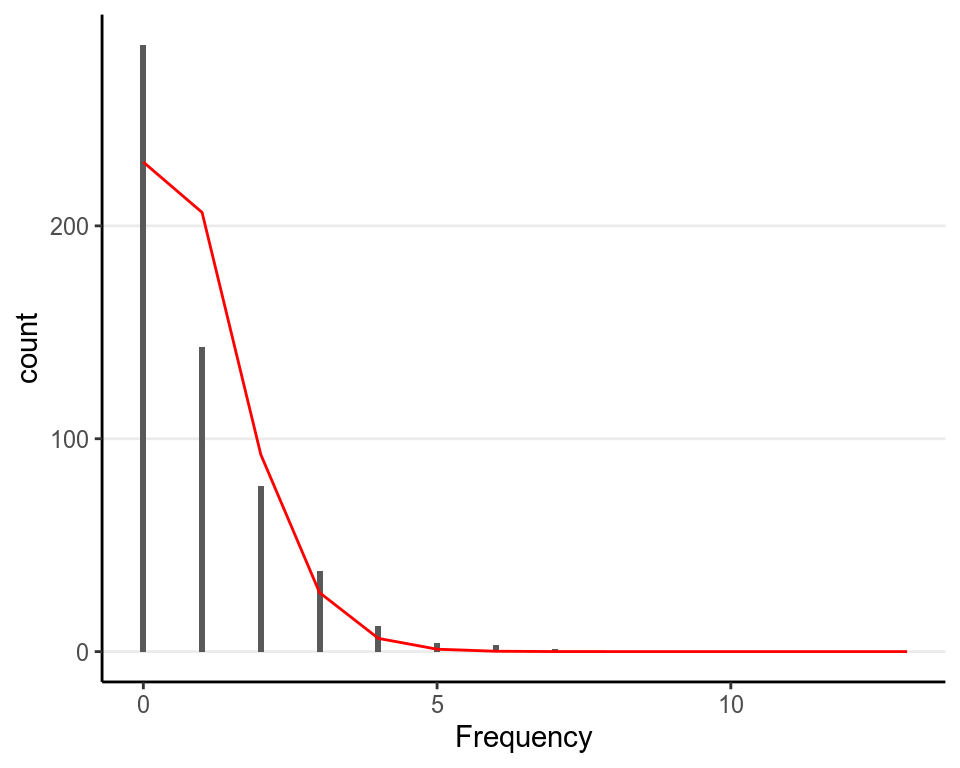 As you can see, the Poisson distribution describes the skewness of the data reasonably well, but there are more zeros in the data than what the Poisson would expect. However, we will proceed with the Poisson model first in this lecture, and we may deal with the extra zeros later in the cocurse.

With exchangeability, the model will be

A conjugate prior for the Poisson model is the Gamma distribution family, which has two parameters: \(a\) is the “shape” parameter, and \(b\) is the “scale” parameter. Notice that \(\lambda\) has a support (i.e., acceptable values) of \([0, \infty)\). \(a\) and \(b\) have (roughly) the following interpretations:

However, with the improvement in computational speed, the need to use a conjugate prior becomes relatively small, and so the for this example I will show you the use of a non-conjugate prior. A general strategy to using a weakly informative prior is to first transform the parameter into one with a support of \([-\infty, \infty]\), and the natural log transformation is common for the Poisson rate parameter.

Our Poisson model and prior are thus

The priors are plotted below: 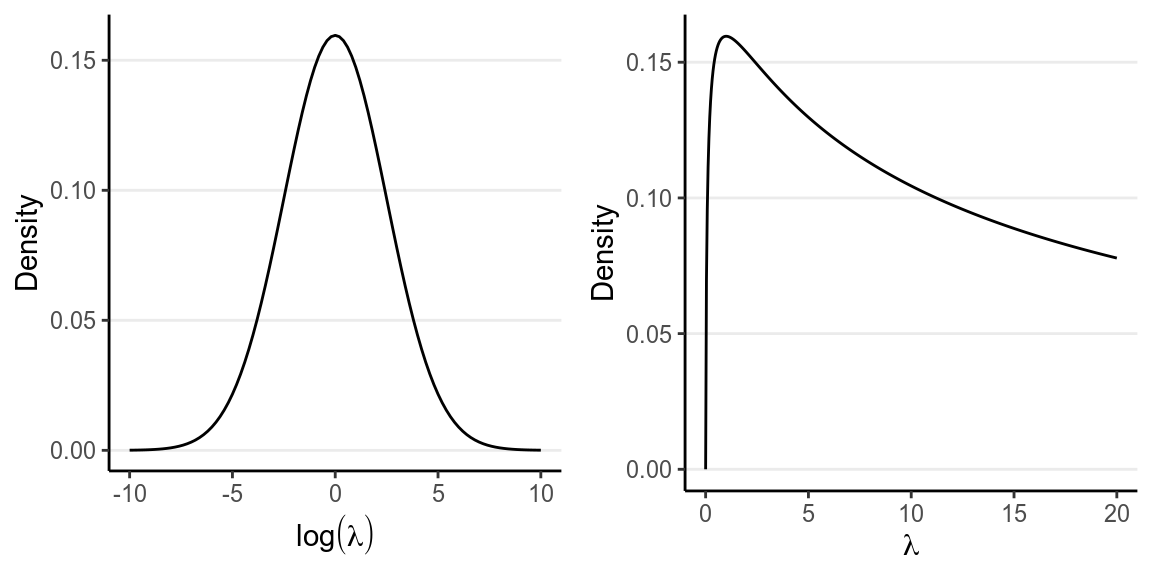 Here is a graphical sketch of the model and the prior using the R package DiagrammeR:

Note that there currently is not a widely accepted standard for drawing these kinds of graphs, but as long as you have a reasonable and consistent way to represent them it should be fine. The double bordered node is used to show a deterministic node (i.e., a transformation of some variables).

With a non-conjugate prior for a Poisson model, we will need to use MCMC. Below is the STAN code and the R code for running the model with our prior. We’ll talk more about STAN in later weeks; for now, just use the code to run the example.

Below is a summary of the posterior distributions

As now you should know, always generate some simulated predictions from the model to check your results. 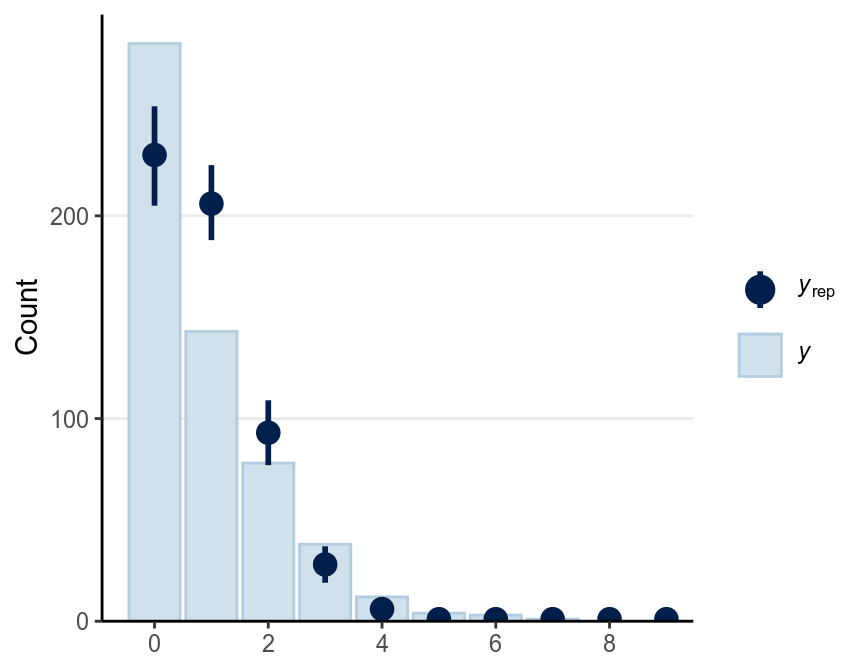 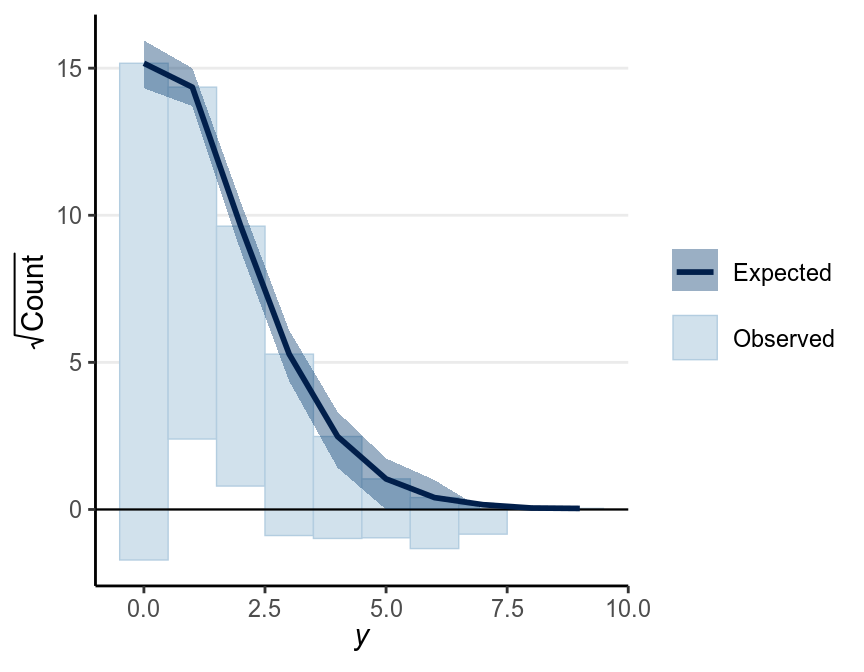 As can be seen, the predicted counts were off a little bit. Things that can improve the model includes: