All statistical models are sets of assumptions about the data generating process, and estimation will be meaningless or misleading if theses assumptions do not hold for the data. As we have discussed, choosing a good model is generally way more important than choosing a good prior. In this week we will learn some tools to check the validity of linear models. Most of them are similar to what you have learned in frequentist regression.

Below is the posterior predictive graphical check for the interaction model we fit last week (with centering): 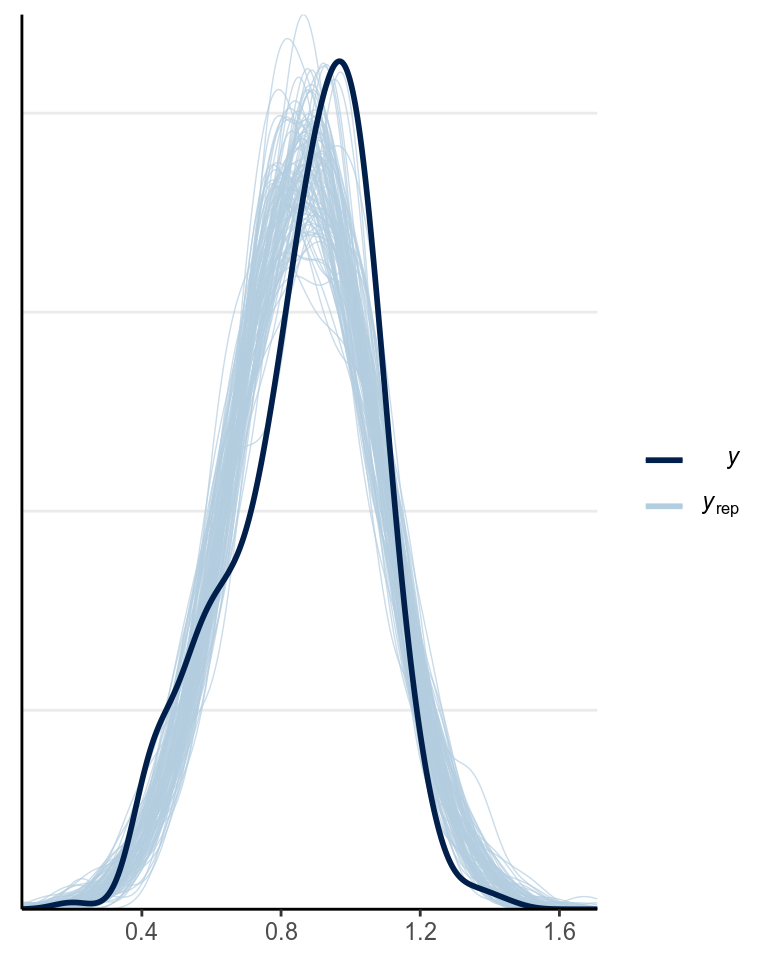 Based on the graphical check, we do not see any major systematic discrepancies of our data from what can be predicted from our model.

We should do the posterior predictive check with test statistics too. The following functions show the mean, maximum value, and minimum value of the outcome. 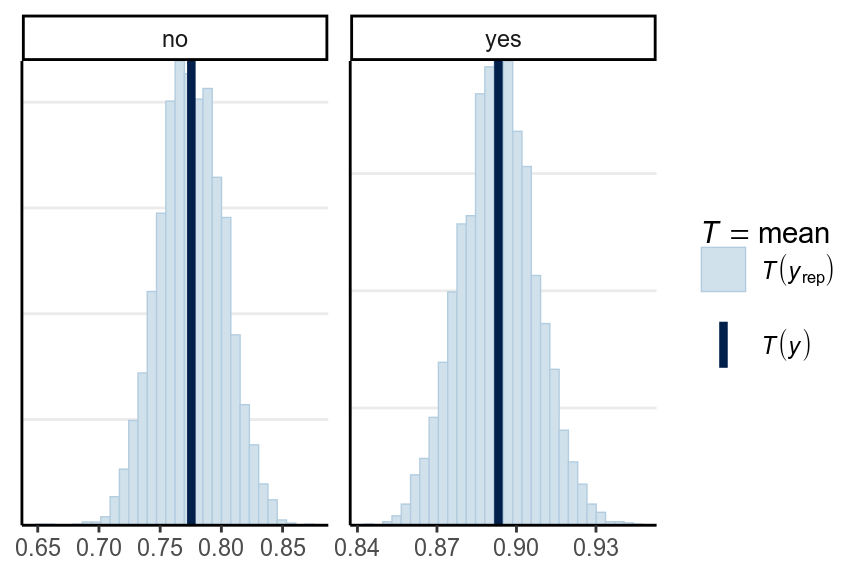 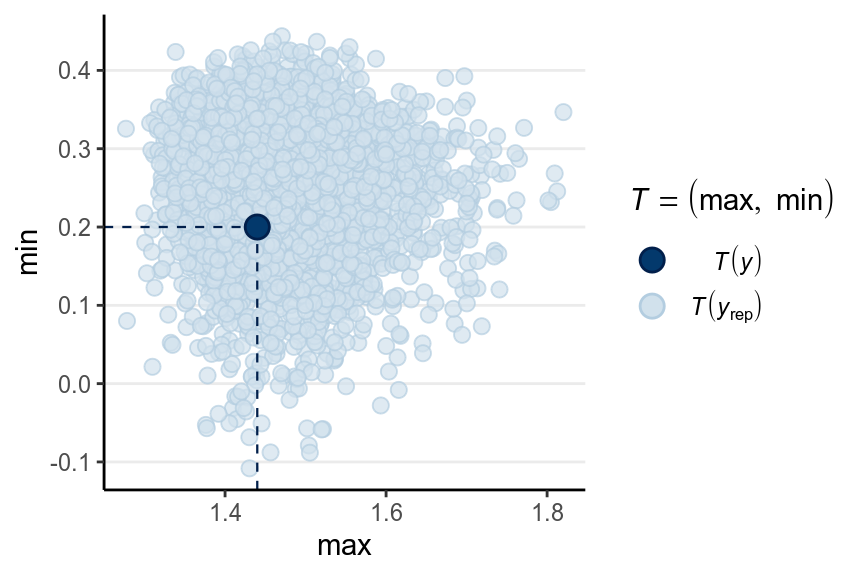 Here is a ribbon plot to check for outliers: 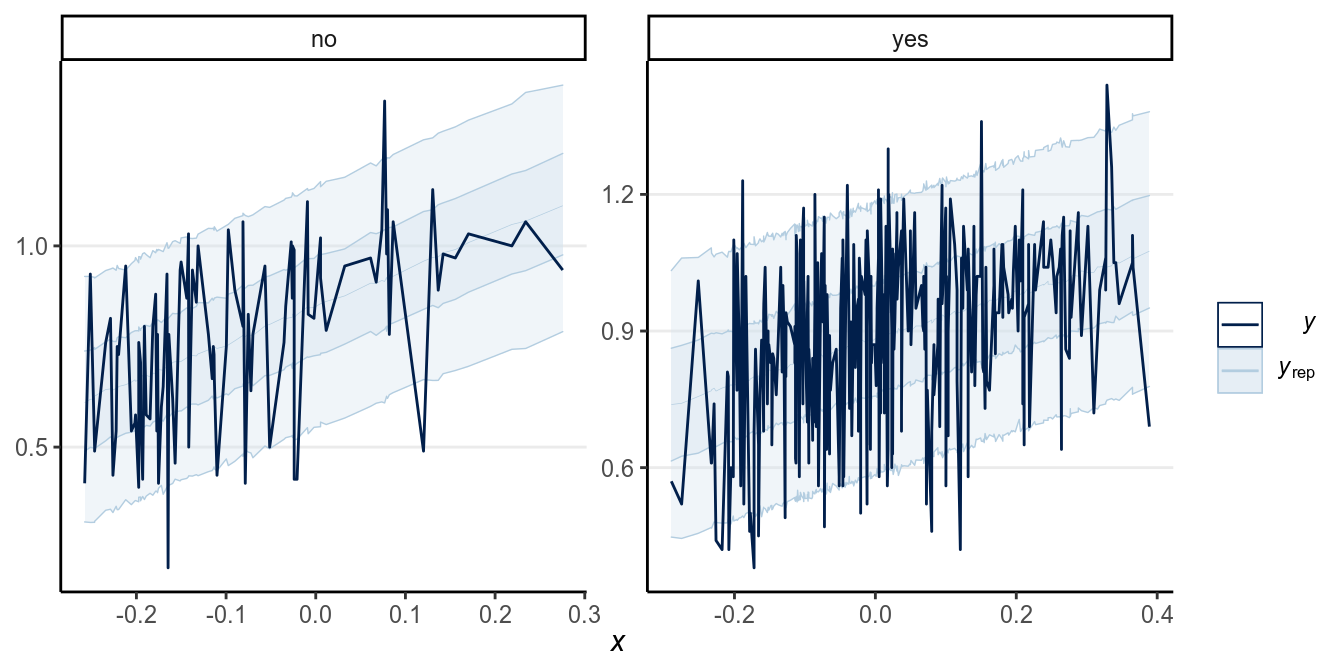 Some points are outside the 90% predictive intervals.

To check the linearity assumption, we need to make sure that the conditional mean of \(Y\) fit according to the model. A marginal model plot compares the model predicted relationship between the outcome and each predictor, and the relationship obtained using nonparametric methods with smoothing. There is not a built-in function for marginal model plot in R for Bayesian regression, but it’s available in the R function mmp_brm I wrote. 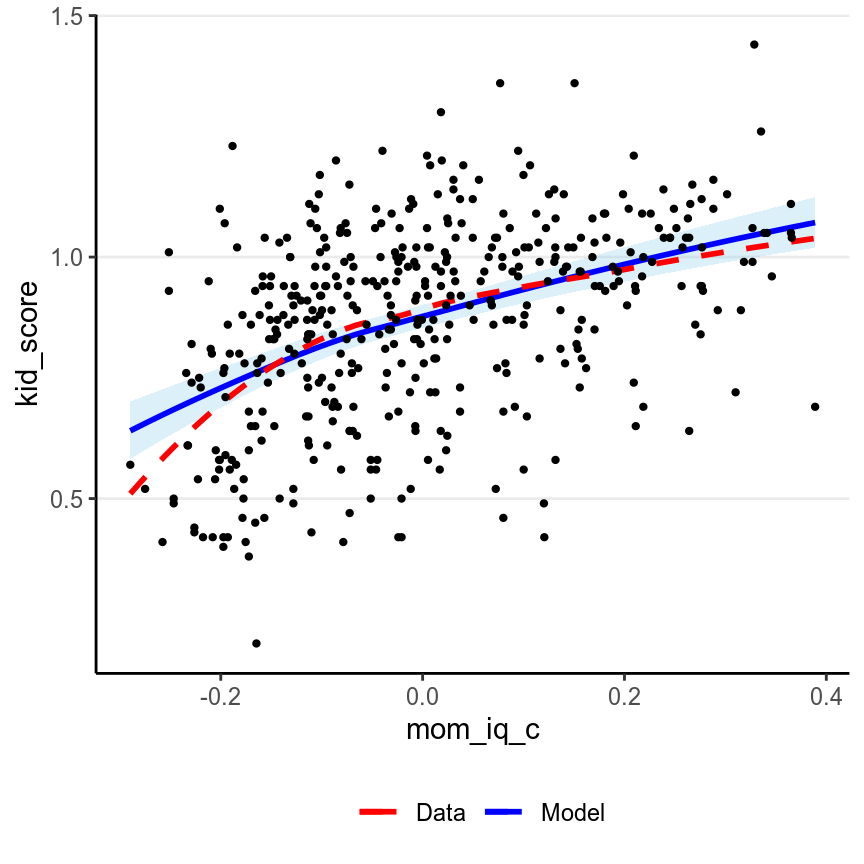 Generally, marginal model plot is more appropriate for ordinal or continuous predictors. As you can see above, the red line (for nonparametric fit) and the blue line (from the linear model) fit the data well, except that for the left tail area where there are fewer data points. If the linearity assumption holds, these two lines should be very similar. Generally, a little bit of deviations in the left tail and the right tail are okay. Deviations in the middle would indicate a strong misspecification that needs to be fixed.

For regression analyses one can learn a lot about model fit from the residuals, which is \(y_i - \tilde{y}_i | \theta\), i.e., subtracting the observed \(y_i\) values by the posterior predictions. Because in Bayesian there are not just one prediction, but a whole predictive distribution, one also has an entire posterior distribution for each residual. Below is a check of the average residual \(Y\) (i.e., \(Y\) - \(\hat Y\)) and the true value of \(Y\). If the model fit the data well, the points should be scattered with no specific pattern, like the graph below: 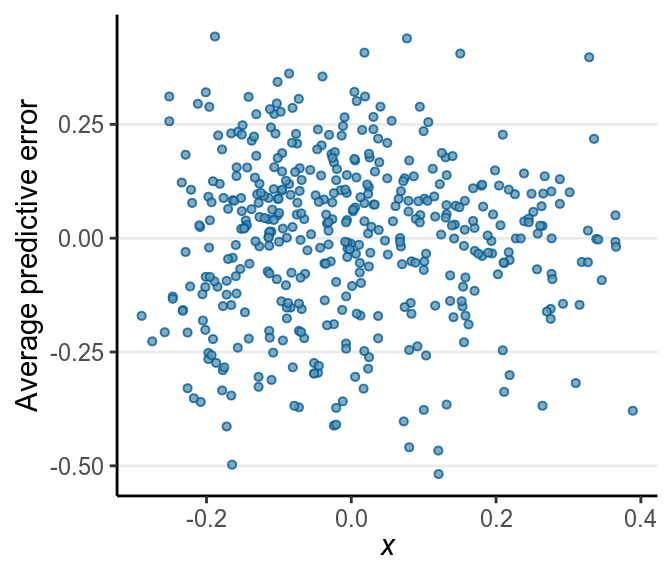 No big problem was found in the residuals. If you see that the SD of the residuals is not uniform, or the residuals have some non-linear relationships with the predictor, there can be some problems. 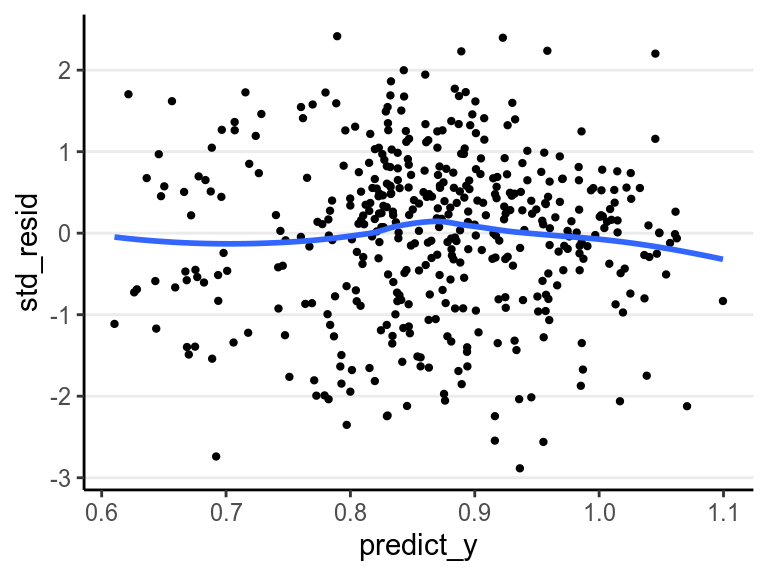 All points are within the -3 to 3 range, so no big issues with outliers. Also, the errors of the residuals have similar variance/spread, so the equal variance assumption is fine. In addition, if there are any systematic pattern between the residuals and the predicted \(y\), or any systematic pattern between the residuals and any of the predictors, the model can be misspecified and some additional predictors or nonlinear terms should be included.

Strictly speaking, multicollinearity is not an assumption of regression. However, especially in frequentist analysis, having predictors that are strongly correlated can increase the uncertainty of the posterior distributions of the regression coefficients. On the other hand, the use of the prior distribution in Bayesian analyses can somewhat come to the rescue, as it makes it less likely for the posteriors to have extremely large posterior mean and standard deviation [which sounds like an important research project].

You can look at the posterior density of the coefficients to see how correlated they are: 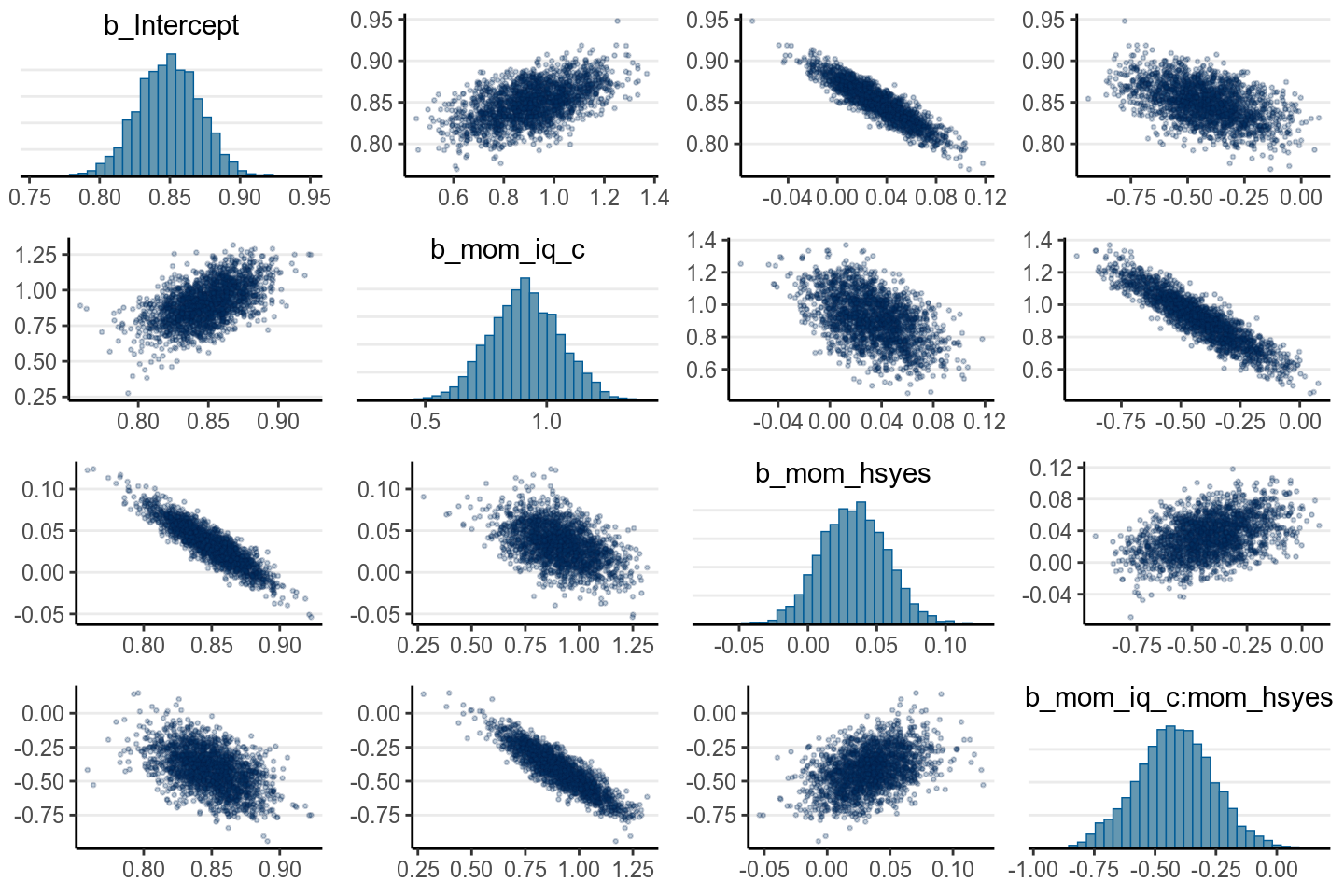 If some coefficients are particularly strongly correlated, you may need to think about using a stronger prior or combining some predictors. Principal component and factor analysis are some approaches for that. In the above case it’s still okay.

Robustness refers to the degree to which the results of statistical analyses change with assumption violations; a robust method would give similar (consistent) results when certain assumption is violated (to a certain degree). As you already know, there are several assumptions in a linear model; however, unfortunately, often when one says robust methods, it is not always the case that they specify which assumption violation the methods. More commonly than not, a robust method is robust to outliers/influential observations, where outliers are data points that are unusually distant from the majority of the data. For example, both the red and the green dots will be considered outliers in the graph below, as both are away from the majority of the data. The red point will be considered an influential observation because it can have a relatively large influence on the regression line. 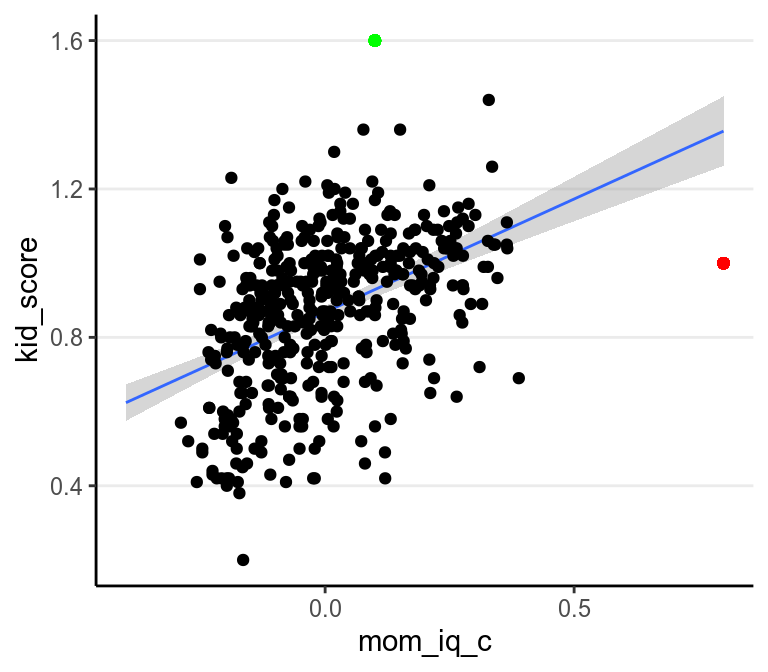 One relatively straightforward way to extend the normal linear model to one with a \(t\) likelihood: 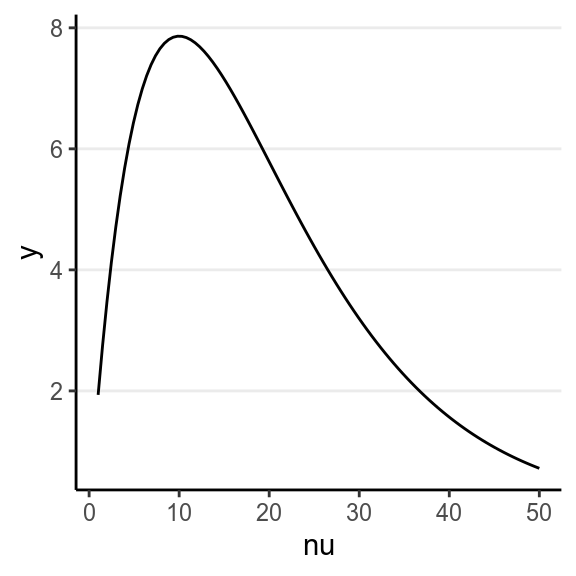 The data did not indicate strong outlier influence, as you can see from the nu parameter: 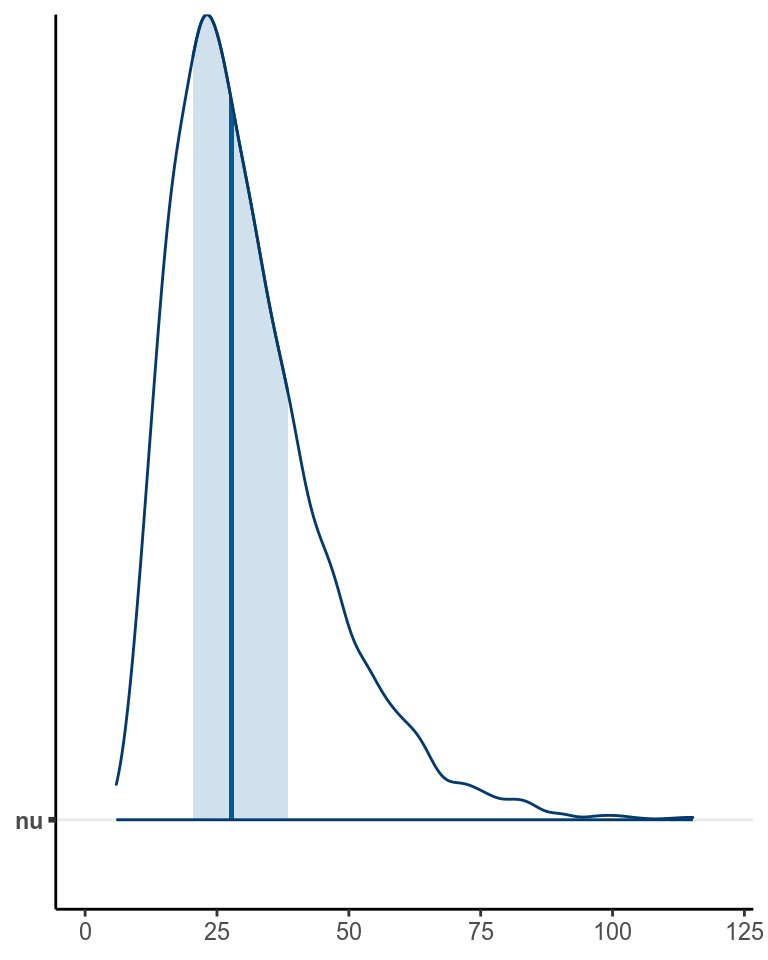 which is pretty large.

If you compared the results of the normal model and the \(t\) model the results appeared similar:

The LOOIC and the WAIC reported, which we will talk about in the next set of slides, but generally we prefer a model with a smaller value of LOOIC and WAIC.

In the linear model, we have assumed that the \(\sigma\) parameter is the same for every individual, which is the equal variance assumption. However, such an assumption may not always hold, especially in data when some scores represent aggregates of more than one person or time points (e.g., see your homework problem). For example, you can look at the residuals in the following: 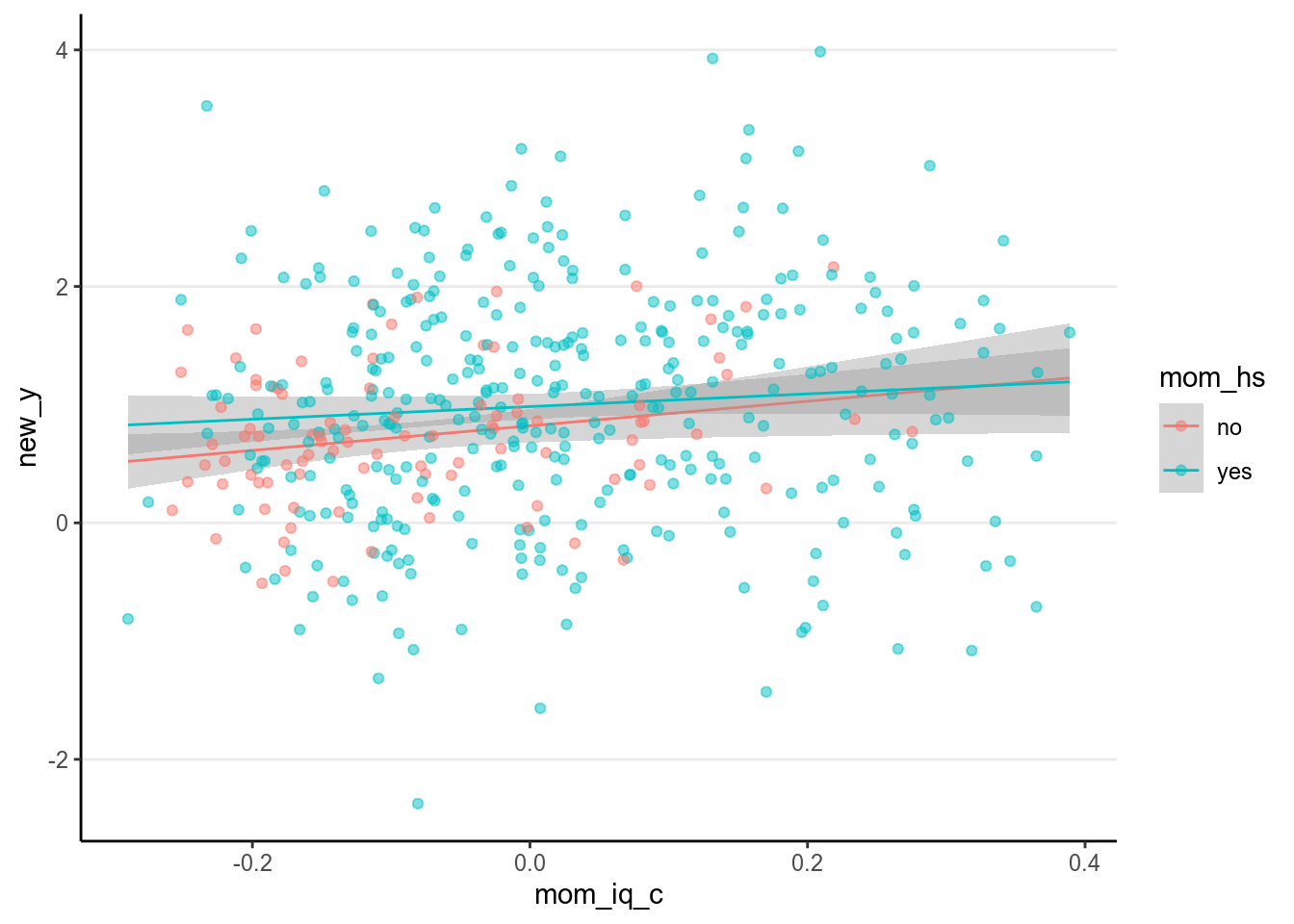 Check the variability for each group. How are they different?

If you suspect that the spreadness (\(\sigma\)) depends on some predictors, you can run the following brms model to see whether the spreadness differs across mom_hs levels:

So not much evidence for heterogeneity of variance across mom_hs in this case. The coefficients were expressed in log unit, so you need to exponentiate the coefficients to get back the \(\sigma\) coefficient. Specifically,

There are other topics we have not discussed here for diagnostics of multiple regression, but are just as important as in frequentist analyses. These topics include: